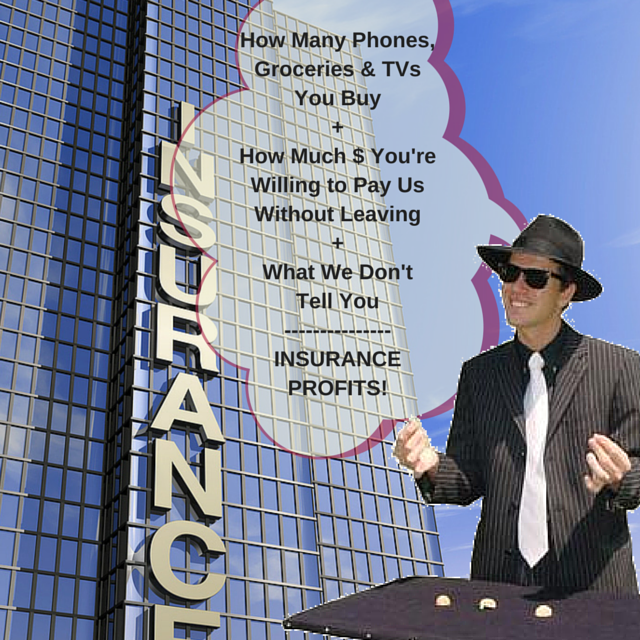 How many cell phones you’ve bought, what television service you use, and how many beers you purchase just might be factors in how much you pay for car insurance. What’s that you say?  You thought your insurance rates were based on driving record and good grades in school? Turns out those might not be such good hands after all.

Consumer Reports just published a scathing article with a significant amount of information that is… or was up until now, largely hidden from the public by many of the insurance companies in America.  Get used to hearing the words: “price optimization”.

Price optimization, (illegal for car insurance in several states – but not in Colorado), uses data about you – cross references it with statistical probability models – and estimates how likely you are to put up with a price increase.  Ask yourself this question: when was the last time your insurance premium went DOWN?  An even better tell: When your insurance company raised your rates… did you start shopping for a different company?  And finally – did you leave your insurance company after an increase?  If you put up with it… chances are very good that they (your insurance company) were banking on exactly that outcome, and are raising your rates to what they believe you are willing to tolerate.

The shell game gets even better! Know what they do with all that extra money gained from their price optimization? They purchase even more ads telling you that you could be saving upwards of $500 a year if you just switch to their service.  Bundle services, and you can save even more… right?  Hold on a minute… that’s not exactly accurate, either.

According to Consumer Reports, your credit score has a LOT to do with how much MORE you will pay on your premiums each year.  Oh, and you know those progressive, Austrailian-accented, and good-handed commercials you see on tv? Turns out, they actually cost much more than you might think!  Sometimes almost TWICE as much!  You see, they only tell you what you want to hear.  And once they’ve got you, they tack on all the “invisible” stuff that no one knows about, and WHAM! You’re just another statistic.

Two insurance companies have gone on the record to state that they do NOT use price optimization. They are Amica Mutual and State Farm.  We acknowledge and applaud their stance on this matter.  You can read the entire Consumer Reports article here, and decide for yourself how you feel about big brother watching your every move, purchase and behavior – and partnering with your insurance company to increase rates beyond your driving record.  If you feel strongly about requiring insurance companies to stick to the relevant information – you may also sign a national petition at the bottom of the Consumer Reports article that states: “Price me by how I drive – not by who you think I am”.