And the winner is…

When Nylund’s Collision Center’s owners, Robert and Carol Grieve, expressed their gratitude for their customer’s support in the Denver A-List competition, they never expected the outpouring of goodwill that they received. “It was our intention to be a blessing by offering a donation to five of our favorite charities,” said Robert. “Instead, we were blessed by the hundreds upon hundreds of people who spread the message and helped guide our giving.” 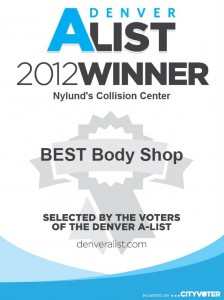 During the A-List competition, The Grieves decided to thank their supporters by giving a cash donation in their name to the ACTS Resource Center, Dolls for Daughters, Children’s Hospital, June’s Fund and American Military Family charitable organizations. These organizations were chosen because they are local to the Denver metro area, and each one has close ties to Nylund’s owners.

Supporters of each of the five listed charities were given the opportunity to direct a bonus amount of money by visiting the Nylund’s Facebook page and voting for their favorite charity. So many people got involved that the Grieves decided to award bonus funds to the top three charities. American Military Family, Dolls for Daughters and ACTS Resource Center received the most votes, and therefore will receive increased donations.

Nylund’s Collision Center has been a conduit of support for these, and several other charitable organizations since the Grieves became the owners in 2006. “Giving back to those who serve our children, our country and those who cannot take care of themselves is one of our core values”, says Carol Grieve. And the staff, friends and customers of Nylund’s all participate in one way or another.

The Grieves wish to express their sincere thanks to all those who not only voted them Best Body Shop 2012, but to all of the volunteers that support the critical work provided by each nonprofit organization.

For more information on Nylund’s Collision Center, or to be considered for future charitable contributions, please contact Robert Grieve at 303-761-9219