We See What Others Don’t

by Nylunds Collision Center | Jun 15, 2013 | Customer Service, From The Owner

The other day we received a car that – from the outside – looked like it was in fantastic condition. The owner explained that they had recently been in an accident, and following the “recommendation” of their insurance company, took it to one of their “authorized” repair shops. Upon completion of the repair, the customer took delivery of the car, and while it appeared to be a job well done on the outside… something just didn’t seem right.

The customer took the car to the dealership to get it aligned, but despite their best efforts the alignment wouldn’t take. After several unsuccessful attempts, the customer brought their car to us here at Nylund’s Collision Center.

The first thing we do, is listen to the customer. That may seem overly simple, but it is our experience that when a customer says that something isn’t right… they’re usually correct. Upon opening the hood, right away we noticed the abundance of third-party and aftermarket parts. Holes didn’t align, so the last shop just drilled new holes or fabricated brackets out of scrap metal. The car was a mess – and that’s an understatement. 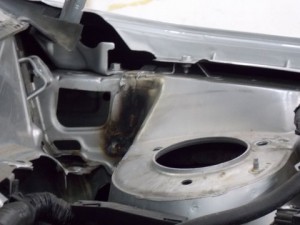 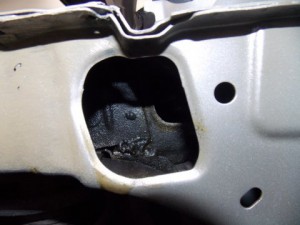 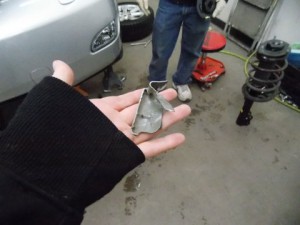 When a car doesn’t align properly, it’s usually a problem that is invisible to the naked eye… but easily revealed by our frame straightening equipment that measures down to the micron. In this case, it was quite clear what the problem was. The direct repair shop, in partnership with (i.e.. who answers directly to) the insurance company not only hacked up the obvious repairs… but they completely ignored the more significant issue of bent structural parts.

Of course we brought in the insurance company to assess the issues described above. They agreed that the job was poorly done, and authorized us to correct the structural elements and fix the “repair” of the last shop. To the tune of about $12,100.00 above and beyond the original “repair” estimate. And what was the original estimate for all those inferior parts and poor craftsmanship? That discount shop and insurance paid out more than $14,000.00 for the first “repair”. Oh… and that car – a 2009 Lexus RX 350… books out with NADA at $26,350.00. You do the math.

And this is why we absolutely refuse to cut corners here at Nylund’s. Doesn’t it make better sense to do the job the right way the first time? Nylund’s Collision Center… where if it isn’t perfect – it isn’t leaving!